I love my smart phone.

This past weekend there was a special youth hunt in Michigan.

No, we weren't huntin' for yoots. We were lettin' da yoots have a go at hunting deer with their weapon of choice before the archery season opens to every Tom, Dick and Harry on October 1.

Since Steve is the mighty hunter in our household, and it was Sam who was excited about going hunting over the weekend, Steve made arrangements to take a quick trip home to take his boy out. That's the good news. The bummer of it was a) it was a very quick trip, and b) Sam did not bag a deer while Steve was here.

What does any of this have to do with my phone? Well I'm gonna' tell you.

Steve left to return to work Sunday afternoon. Sam knew he had one more opportunity to hunt Sunday evening ... he just needed an adult to accompany him. Despite my every protest to his begging and pleading, that adult turned out to be me. I figured I could enjoy a bit of nature and spend some quality quiet time with my first-born. I took my phone along to keep track of the time and, if I got really bored, to play a few games to pass the time.

Sam and I settled in. We shared some candy corn and a few laughs while we waited for dusk. And I groaned to my procrastinating self that I really should have been at the house typing out my newspaper column.

Then I remembered I have an option for creating text documents on my phone. Yes, it requires plunking the words out with my thumbs on the tiny keyboard, but at least I could have my column mostly written when we got back to the house. So there I sat, "tick tick tick tick tick tick ticking" away while Sam kept a lookout for deer.

When I finally decided I had a good-enough start on my writing, I put my phone away.

Then I pulled it out a few minutes later to snap a random photo of Sam. 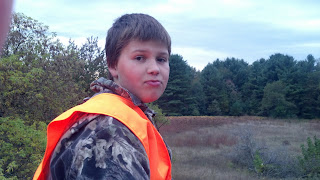 Then after we saw two does running full speed through the field - a sign that things were going to get exciting - I sent Steve a text telling him how we were doing.

Sam asked if I would use my phone to take a video of him if he got a chance to shoot something. I promised I would do my best. I suggested we have some fun and make one of those cheesy hunting videos where the subjects do that whisper-yell thing back and forth, all hyped up just to be in the out-of-doors ... maybe some Auzzie accents or somethin'. The look I got was similar to the one in that photo above. Buzzkill.

It's almost dark. I stand up to stretch. We had seen four or five deer. I'm about to suggest we call it a night when we see another deer come barreling into the clearing. It stops in a stand of weeds and Sam finds it with his scope. It turns and starts walking back toward us and Sam sees that it's a buck. I grab my phone/camera and slide it to Video.

But I did get it on video, which helped tremendously as we tried to figure out exactly where the deer was when Sam shot and which direction he ran.

It got dark and I used my phone as a flashlight. Yes, there's an app for that.

And when we found the deer - mercifully, not far away - I took pictures with my phone. 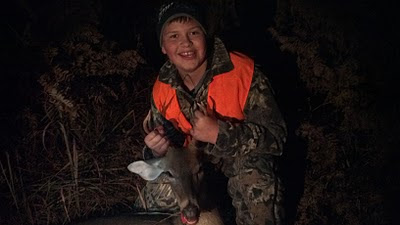 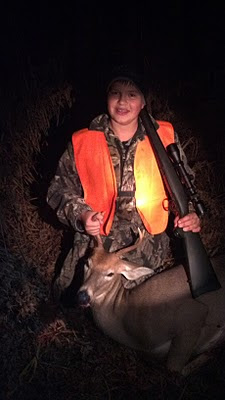 It's a nice 4-point, he shot it with a .308, and I wouldn't even guess at the distance. I can tell you it was far enough that I wouldn't have been confident taking the shot myself, and I'm so proud of Sam for how composed he kept himself the whole time.

So in this case, even though I've struggled at times with paying the fees for a bunch of options I don't really need (and who does, really?), today I am in love with my smart phone. It served as a clock, a word processor, communication device, camera and video camera, flashlight, and a potential source for entertainment, all within a couple of hours.

Watching my son have a successful hunt and being there to record it? *Double love!*