I was pulling some rogue ferns out of my hostas when I saw some leaves that were green and pretty, but most assuredly not hostas.

As I picked my way through the hosta leaves to find the base of these other plants so I could yank them out, I realized they were ... could it be? Yep. Sure enough.

Lilies of the Valley! 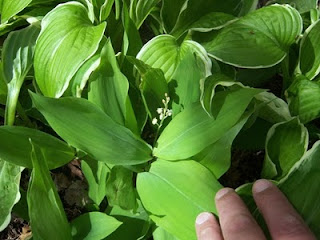 But wait. I didn't plant any Lily of the Valley here.

Last year I did stick a dead, withered sprig of lilies in the ground about 10 feet away on the other side of the shed. Rachel had picked them for me from my mom's house and since it appeared she yanked them out by the roots I wondered if by some miracle they would sprout this spring.

I had completely forgotten about that until now. 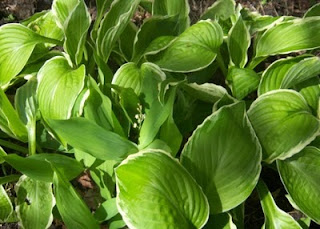 For several minutes I was perplexed at how the little, shriveled up plant might have gotten transferred from one side of the shed to the other. Lilies of the Valley propagate through their roots; there are no seeds for squirrels to carry off and bury elsewhere.

And then I remembered how I have been tripping over the paving stones I placed in front of the shed door because they were pushed up and left uneven by a mole. Said mole apparently does laps under my pavers ... you guessed it ... from one side of the shed to the other.

Hmph! I'll show him. Whiskers The Cat happens to like the taste of moles. 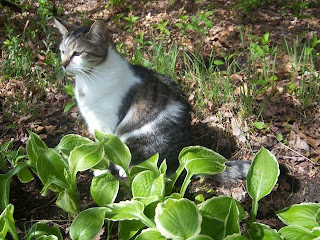 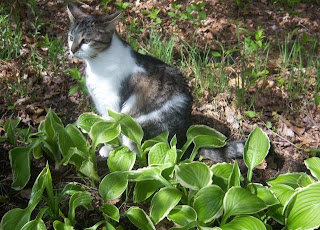 That's right, I said "MOLES!" Whaddaya gonna' do about it? 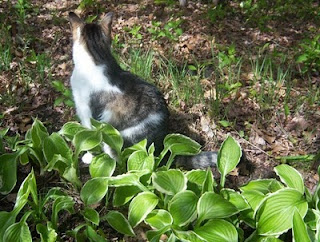 What's that? You hear one? 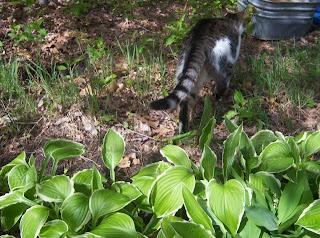 Go get 'em! Good kitty.
Be afraid, moles. Be very afraid. I have the Chuck Norris of cats here and I have promised her tuna for every dead subterranean animal she leaves on my doorstep.
I didn't yank the lilies out, by the way. I think I'll wait until fall and transplant them somewhere else, hopefully out of the path of any moles that remain after Whiskers returns from the hunt.
Posted by Jen