After mentioning this recipe ... oh ... a couple of weeks ago, I finally got around to making some granola. Yesterday was rainy and dreary and dark and cold - a perfect day to hang out in the kitchen.

I have just one stipulation for whipping up a fresh batch: I have to do it when I have plenty of time to let it cool completely, seal it up in a container and put it away out of sight, and preferably let the smell of fresh-baked goodness dissipate before the kids get home from school. Otherwise, if they come into the house and smell granola and I don't present them with any, there is a very high likelihood of mutiny.

Remember, I'm outnumbered here. These are the kinds of things I have to think about when my husband isn't around.

Here is the recipe I have to work with: 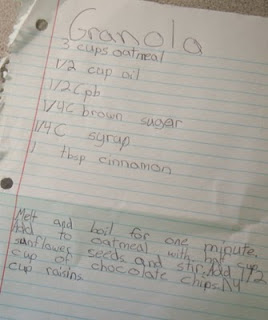 This I got only after the basics were relayed to me via e-mail and copied from the computer by Rachel. I had asked Steve for his recipe after I searched hopelessly for it in the cupboard. Because - I would like the world to know - that despite wanting to avoid being known as anything close to "crunchy," Steve is the real granola-making royalty in this house. That's right. Not only does he like to eat it, he makes his own granola. I maintain he is a tree hugger at heart. Don't let him tell you otherwise.

Here are the ingredients you'll need: 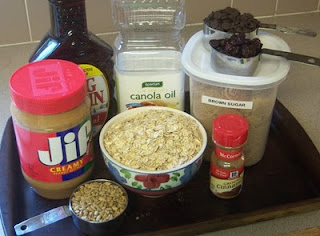 3 cups oatmeal (I guess that would be uncooked, instant oats)
1/2 cup oil (I use canola)
1/2 cup peanut butter
1/4 cup brown sugar
1/4 cup pancake syrup
1 T cinnamon
1/2 cup sunflower seeds
1/2 cup (or so) chocolate chips
1/4 cup (or so) raisins (Horror of horrors! I had NO raisins in the house so I used dried tart cherries. Use whatever you like. Varying the yummy extras in this recipe will not ruin it.)
Cookie sheet or shallow baking pan. I am fortunate enough to have a wicked cool, amazingly well-seasoned baking stone. If you don't have one of these, you might wanna' spray your baking pan with a little non-stick spray.

Sidetrack: Is there anything in this world as sweet as a brand new, freshly-opened jar of peanut butter? Mmmm. I think not. That just totally makes my day. 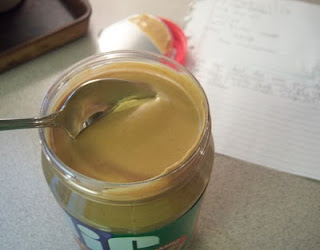 Preheat the oven to 350 degrees.

In a medium pot, melt together the oil, syrup, peanut butter, brown sugar and cinnamon until it boils. Keep stirring and let it boil for one minute. Then turn off the heat.

Add the oatmeal and sunflower seeds and stir it all together until the oatmeal is coated. It'll look all sticky and yummy. Mmmmmm. 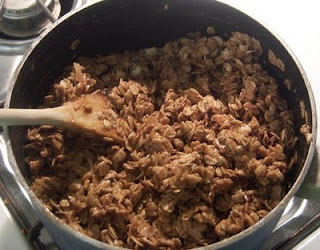 Dump that sticky, yummy blob onto your baking sheet and spread it out with a spatula or the back of your spoon. 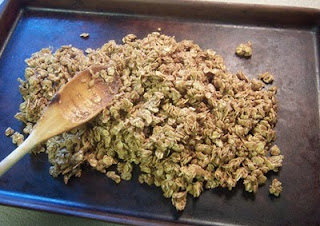 Now stick it in the oven for about 10 minutes. Set a timer if you think you'll forget because trust me, you don't want to burn the sticky, yummy stuff! After about 10 minutes - or about the time it would take to empty the dishwasher or put away all the leftover ingredients and throw in a load of laundry - take the granola out of the oven and use a spatula to flip it. It's not going to be crispy quite yet. Put it back in the oven. 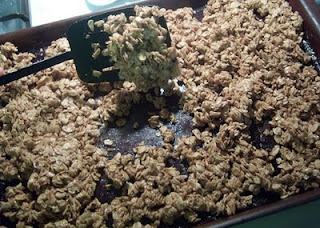 Seriously. You're going to want to put something in your belly before you take this stuff out of the oven or you will eat it all. You will risk burning the inside of your mouth and your entire digestive tract because you think you will try just one bite but you will want more, and there is no resisting.

Listen to the voice of experience.

OK, but you can't say I didn't warn you.

I think this is as good a place as any to tell you that the granola doesn't really change colors from beautiful golden brown to grayish-looking gruel like it appears to in the pictures above. That's just my crappy camera (which I really am so happy to have), the lack of natural light coming into my kitchen (it was a dreary day, remember), and probably several other factors. Really. I am developing a serious respect for the food hacks who take awesome photos with one hand while frying something in hot oil with the other hand. Whew.

I'm afraid there is no distinct way to check whether your granola is "done" when you take it out of the oven. If it looks good and smells good and you hear a little sizzling action goin' on, it's probably done. It's still going to look a little ooey-gooey, but it'll crisp up as it cools. Just set the pan on the stovetop and - this is very, very important - get out of the kitchen. Go watch Oprah. Take a nap. Play a round of Scrabble with your spouse. Write a very lengthy blog post. Something. Anything that will keep you from even walking through the kitchen while the granola cools. I'm not kidding!

When it is completely cool, you may return to the kitchen and spoon it into a bowl and toss it with the chocolate chips and raisins (or cherries or nuts or M&Ms or all of the above, whatever you like). 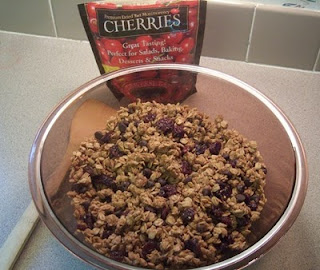 When I got mine all stirred up I felt like there weren't enough cherries in there, so I added more.

There. NOW you can eat some. But I'm warning you, this stuff is addicting. Like crack. So I've been told.

If there's any left after you've had your just one bite, store it in an airtight container. 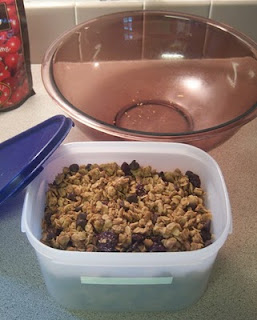 I really only had just one two three four (or so) bites because this batch is going to our neighbors who supply us with fresh eggs from their chickens.

And now that I've told you that, I am obligated to actually seal up the container and set it aside until I have a chance to deliver it.

I'm closing up the container now. I swear.

What? I am!
Posted by Jen