Hey, Boss? I took the afternoon off.

I had what I considered a really lazy day earlier this week and I felt totally guilty.

My husband thought I was crazy for feeling guilty and when he asked me why I did, I had to think about it for a minute. I'm still not really sure. Just some of that stinkin' thinkin' creeping in, I guess. My mind telling me I should be more industrious ... make hay while the sun is shining ... don't wanna' get fired from my job for slacking off.

Steve told me he wished I would take a lazy day for myself once in a while.

Pffft! Well you don't have to tell me twice.

So I took yesterday afternoon off. I consider taking care of the house and the kids my job, and since I don't have to do much for the kids while they are in school during the day, I vowed I would do nothing even remotely resembling work around the house from noon until 4 p.m. when the kids got off the bus.

I almost made it. I did take some trash out because while I was sitting on the deck in the sunshine, eating my sandwich for lunch and reading a book, I couldn't make myself ignore the few things sitting there waiting to be taken to the trash bin. But that was the only "work" I did all afternoon. I enjoyed my afternoon off so much I'm thinking this should be a regularly scheduled thing.

In addition to generally just chilling out, I also enjoyed a stroll through the woods on the hunt for morel mushrooms. It's a little early, but I have heard reports that people are finding them in our area.

Straight out of the gate - bam! - I found one alongside our driveway: 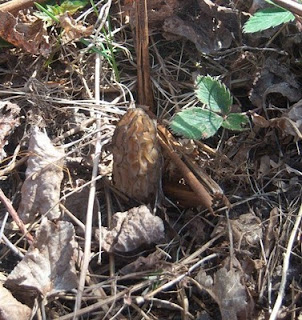 I thought I was going to have a great hunt. Turns out I mostly just had a nice walk through the woods. I found only three morels, but now I know they're at least getting started. 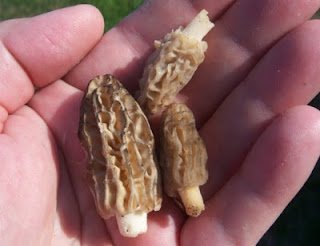 I saw a lot of these little flowers while I was out, too: 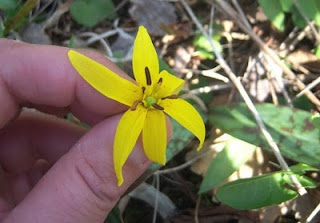 I didn't know what they were, so I looked them up when I got back in the house. Wouldn't want my fingers falling off from touching a poisonous flower, ya' know?

Verdict: Erythronium americanum. Trout Lilies. Not poisonous. Not harmful at all. Native. These wildflowers bloom for a very short time in the very early spring. This other picture I took (below) shows a mature plant in a more "natural" state - two purple and green mottled leaves, and one stem supporting one pretty yellow flower that droops down toward the ground with the petals curling up toward the sky. 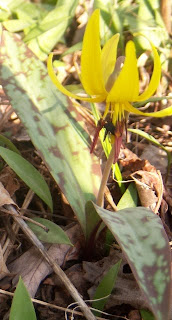 This one also happens to have some sort of small, winged creature hanging out amongst the petals. I let him live.

Neat, huh? Ya' learn something new every day.