He's not just another pretty face.

He's not just a pipeliner, either.

The pipeline pays the bills, but Steve's real passion is fire. 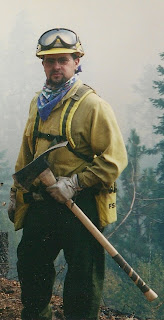 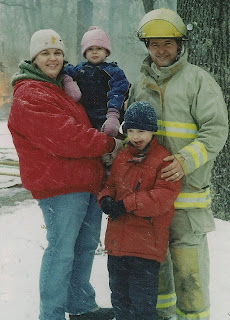 Structure fire. Wildfire. Fire is his mistress, he says. When fire calls in the middle of the night, Steve will get out of bed, get dressed as quickly and quietly as possible, and leave his family to go to her while we sleep. Fire makes him leave family functions in the middle of dinner, keeps him out late at night, and has at times caused me to wonder what he loves so much about it. When the danger of wildfire is imminent, he will spend his weekends on standby waiting for that one cigarette butt flicked out a car window or that spark from a trash burning barrel that ignites a field of dry grass.

In his younger years he spent weeks at a time in other states fighting forest fires. He is a member of our local volunteer fire department. When he has the time - like last spring when he was laid off from the pipeline - he works as a keyman with the Michigan DNR.

Sometimes I think Steve was born with some sort of Must Perform Public Service gene. Or maybe he just can't stand to sit still. Or maybe there really is some attractive or addictive quality to fire.

Whatever it is, it sure keeps life interesting.

As if we were somehow lacking excitement.

Working so far away from home recently has put a cramp in Steve's ability to participate in much of anything related to firefighting, including planning and setup for the department's annual fund-raising event which will take place Saturday. The Fireman's Ball is a pretty big event 'round these parts. Music, refreshments, prizes, dancing. And the best part: connecting with members of the community and fellow firefighters from near and far.

I think Steve will be happy to have a chance to stop in and say hello while he's home this weekend.

I bet lots of folks will be happy to see him, too.