Our Bug is back! 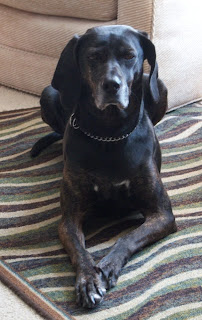 Ladybug came home to us Saturday afternoon after spending two frigid nights outdoors alone and one cushy night in the presence of a loving family with four dogs of their own.

The family who found her are from the Detroit area and were here at their cabin enjoying some snowmobiling. They told us that one of the guys, Randy, almost hit Ladybug while they were out riding Friday night. She had been curled up in a ball in a snowbank and just lifted her head when they zoomed by. When Randy realized it was a dog he almost hit, he told his buddies he couldn't leave that dog out there in the cold. They all turned back and began a 45-minute process to coax Ladybug to come to them so they could help her.

Once they had her, they took Bug to nearby homes and asked people if they recognized her. Nobody did, of course, but one of the neighbors (this was about two miles from our house) offered to drive Randy and Ladybug back to the cabin (about a mile from our house) and then take Randy back to pick up his snowmobile.

Isn't it already obvious how much love and effort went into finding her owners? I get a little emotional just thinking about it.

This family realized pretty quickly what a sweet dog Bug is. They fed her and got her warmed up in the house. They let her crash on one of their dog's beds. They told me it was obvious she was well cared-for, as she was housebroken, crate trained (she was lying in one of the open dog crates when they returned from dinner), and looked healthy and had a shiny coat. She hung out with the other dogs like they had known each other forever. Randy fell in love with her. He said he had decided that if they couldn't find her owner, he would take her home.

Fortunately we had recently attached Bug's license and rabies tag to her collar. I don't know why; I was filing some papers and found her license taped to the receipt from the county and I guess I thought it couldn't hurt. I'm so thankful I did. Her angels called the vet's office (closed on Saturdays), and animal control where I had left information about Bug in case someone did call. Animal control then contacted us, and the rest is history.

Ladybug has been sleeping A LOT since we brought her home. She seems to be moving in slow motion like she's stiff from being out in the cold for so long. I won't even venture a guess about how much longer she could have survived out there. I'm just glad she's home, safe and sound. And the kids? Their excitement is indescribable.

It just goes to show you can still find good people and happy endings.
Posted by Jen

Email ThisBlogThis!Share to TwitterShare to FacebookShare to Pinterest
Labels: Ladybug