I am not a dog whisperer.

But Dear God in Heaven do I need one.

My dog - despite my love for her and the wonderful companionship she provides - makes me crazy sometimes. Just when I think I've got her figured out, or that she's finally mellowing out, she throws me for a loop.

Ladybug has always been a barker, but for two main things: people and raccoons. Bring over a pack of dogs of any size and breed and she will run and jump and sniff and play with all of them. Excitedly. Without barking.

People? She barks at. Always. (Well, except us.) A strange vehicle pulls in the driveway and Ladybug either runs to the end of her lead (if she's outdoors) and barks non-stop, or runs to a window to get a better look ... and barks non-stop.

Oh, and? She slobbers. So you can imagine what my windows look like. 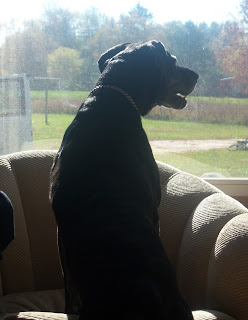 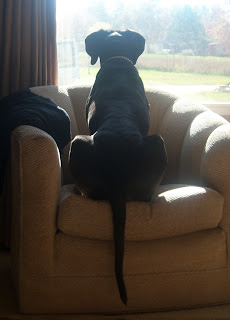 I know you iz out der. 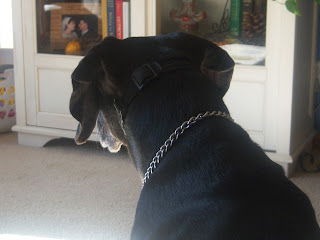 I iz watchin' fer you. 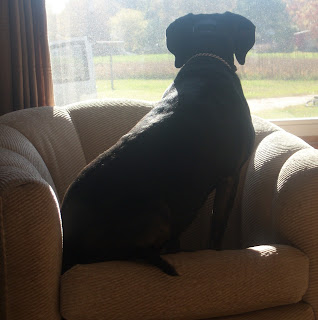 The other day while the plumbers were here I was so embarrassed by my own dog's behavior that I decided I had two options: 1) give up on this doggy business and find her a new home, or 2) commit to some serious training. Or retraining. Whatever.

Since 90 percent of the time she is The Best Dog In The World, I went for option 2 and bought a book about rehabilitating your "reactive" dog. Because as it turns out, as I was reading about reactive dogs - dogs that become fixated on other dogs, or people, or go bonkers when put on a leash, or can't seem to settle down in the car - I realized I was reading about my dog. 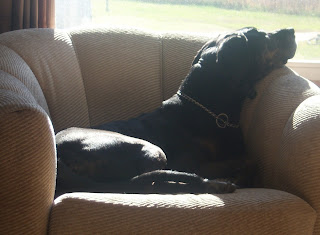 I iz tyred. But pretty sure you still out there.

Some history: we adopted Ladybug from a no-kill shelter. I picked her out from hundreds of dogs I saw on-line. When we went to visit her she was so laid back and came right to us when the volunteer dropped her leash. We took her for a walk and she pulled a bit, but otherwise she was great.

We learned that she was about five years old, had been picked up as a stray and had been at the shelter for six months. Black dogs aren't adopted as often as lighter colored dogs, they told us. My heart melted.

At home it took her a while to settle in, which we expected. She seemed a little jumpy over loud noises and quick movements. Bug wasn't housebroken (I suspect as a hunting dog she was kept outside in a kennel) so it was like having a puppy; we house trained her, and I trained her to sleep in a crate. Neither of those tasks was a small feat and I spent several nights falling asleep with my mp3 player drowning out the noise of her whining in the crate.
Bug has a few bad manners, mostly involving food. We have learned to never leave her in the house alone with an open bag of trash. And never leave your snack unattended on the arm of the sofa.

She has learned a few things in the three years she has been with us. She sits at the door for you to put her leash on for a walk, and sits and waits for you to put her food in her dish. She has warmed up to the cats. She goes right to her crate when I tell her it's bedtime.

But she flips right out when a strange vehicle pulls in the driveway, or when people she doesn't know come into the house. Or approach the house. Or look in the direction of the house from a mile away. 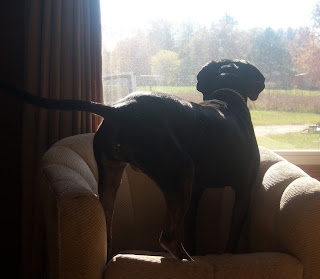 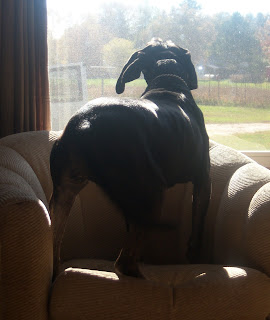 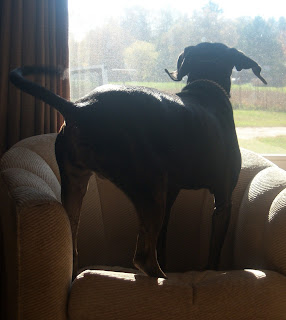 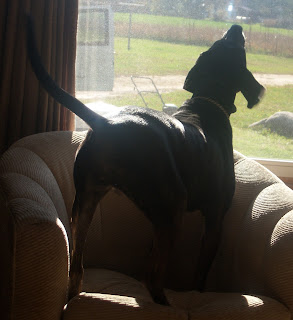 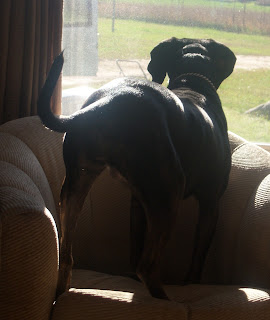 I have learned that if I put her on her leash and allow her to sniff out the strange peeps, she will eventually settle down. (Makes sense - she's a hound. Sniffing is her life.) But honestly, she is a very muscular dog of a breed historically trained to hunt bear. She can look pretty intimidating when she's tugging at the end of her tie-out, barking and slobbering. Who wants to then let that animal sniff their hand?

It's a survival mechanism. Her head tells her strange creatures might be there to hurt her, so she's going to take care of them first. Scare them off. If they seem intimidated her senses pick up on that and it feeds the beast. She gets stressed when her barking doesn't make them go away, so that feeds the beast. And so on and so on.

It's gotten so bad lately that she sometimes barks when the phone rings. Or in the morning when the house creaks and groans as the sun warms it up.

I wish I was kidding.

In other words, I have a 59-lb wuss on my hands. One that could be dangerous (as any dog could) if we don't turn this train around.

So I have begun a new regime. First, Bug is on vacation. She's doing nothing but sleeping, eating, going outside to do her business and take walks with me. She's chillin' to give those stress hormones a chance to fizzle out. And I'm giving her lots of love and attention, she's playing with the kids, and she's getting treats just about as often as I say her name. I've even been feeding her her kibble out of my hand. She's learning mama=good and safe and fun things and the sound of her name=good and safe and fun things. Very zen, right? Let's hope so.

It sounds crazy, but I can already see the difference in her. She's much calmer already. I can tell she's a little confused and maybe even a little suspicious of all the treats flying around, but that's ok.

Have I mentioned my lack of the patience gene? Yeah?

Send some good vibes our way, k? I am up to the task but some added positive thoughts sure can't hurt.
Posted by Jen