Because J said so.

I need to blog. Because my buddy J says so.

I think every writer needs that one person in their lives who isn't afraid to say, "Hey, get off your ass and write something." I know I sure do. Even if it's a rather meaningless blog post, I need to go through the motions of writing something on a regular basis, or before I know it it's been so long that I start to believe I have nothing to say, and anybody who knows me knows that's not true.

So here you go, J. Thanks for the nudge. Dork.

Truth be told, I have been needing to get off my arse in general. I've been feeling like crap lately. And I'm talking a big ol' steaming Jurassic Park-style pile of poo. And when I feel like poo, and on top of it the universe hands me a few rainy, dreary days in a row, it doesn't take very long for me to spiral downward toward the Pit of Despair. Fortunately I have an awesome husband who will drag me out of that spiral kicking and screaming (or wailing and whining that it's just easier to do nothing than to pull myself up by the bootstraps), and a few friends who seem to know - whether they realize it or not - just when to intervene.

We have begun the process of figuring out what's causing my respiratory issues (that I wrote about in my last post). I've been to my family doctor; she didn't see anything freakish. She did see lots of allergy-related irritation in my nose, and something in the back of my throat that needs a closer look. I've had a chest x-ray which came back normal. I now have an appointment with an ENT to check ... er ... deeper into my ears, nose and throat. My doc suggested I might have damaged vocal cords. I googled the symptoms of damaged vocal cords and I think it's definitely a possibility. We shall see.

Meantime, I've also been dealing with some back and neck trouble. Because it isn't enough that I feel like I can't breathe half the time, I also have to walk around feeling like there's an ice pick or two stuck between my shoulder blades. I know ... I'm a wreck. Next week I'm getting a massage in the hope that it will give me some relief. Like a lot of moms, it's not easy for me to schedule that time to focus on myself, but I really need it. If it helps, this will be the first of many visits to the masseuse.

Who feels like she's 80 years old? Is it Pipe Lifer Jen? Dear God. If only I had the wisdom to go along with it.

And that's all there is to say about that for now.

Steve is home this weekend, which is nice. He's down to the last couple of weeks on his current project and then ... who knows? I would love to have him home for a week or two when this job is done before he heads off to the next adventure, but we continue to take things one day at a time.

The kids are busy as ever. Rachel just started basketball practice this week and will have games on Saturdays. Sam has one more football game next week (hoping the team will stay undefeated), and he started Saturday bowling league today. I'm still not sure how I'm going to get everyone where they need to be at the right time on the right days, but that's another task we take one day at a time.

Other than that? Not much going on. Just lots and lots of everyday stuff, really. We've had some work done on the house - new doors put on the front and back (happy!), and a broken rafter (eek!) repaired.

Tonight it feels good to just sit with my hubby and watch the Tigers in the post season. We're headed to church in the morning, and will hopefully have a relaxing afternoon before Steve heads south again.

I leave you with a couple of pet pictures - because they're the only ones I've been taking lately. Gunnar is growing like a weed and has hit the sassy teenager stage. Patch The Kitty ... well, he's just fun to mess around with. 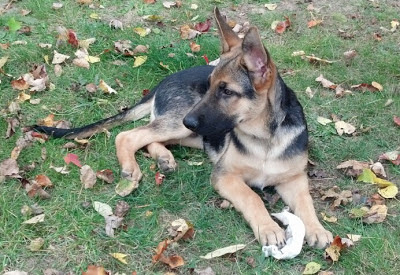 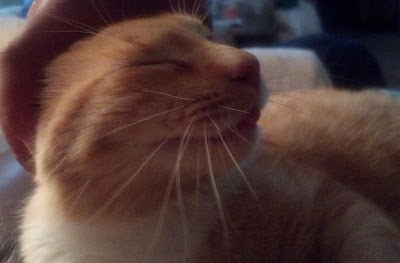