We've had a busy weekend, one of those times I am happy to see coming to a close so we can return to our usual routine. But it's been good. Steve has been home since Thursday after finishing the project he was working on in Detroit and hauling the travel trailer home for the winter. Before he got home he already had another gig lined up - this time in Colorado. It will be a longer trek than what he's (we've) done in the past, but a shorter time period, too. Like six weeks or so, which would have them wrapping up around Christmas time. The kids are already trying to figure out how we can get out there to visit. I'm thinking Christmas in Colorado would be awesome, but it all remains to be seen as Steve has some training to do on-line and will likely head out there at the end of this week. We'll know more once he's settled in. For now we're just enjoying having him here at home.

Yesterday Rachel's basketball team had their first game. They lost, but they played tough and Rachel scored twice. I was so proud of all the girls.

Today was a big day for Sam, and another proud mama moment. After two years of classes, retreats, camp, community and church service, Sam was confirmed as an adult member of our church. I'm so glad he has a personal relationship with Christ, and my prayer is that he finds plenty of guidance in our church family as he reaches adulthood. 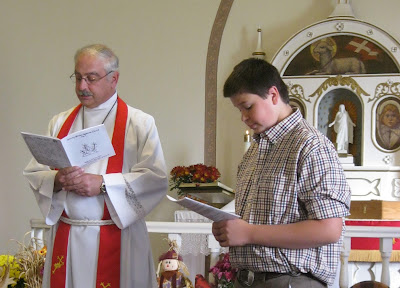 Sam with Pastor Bill during the service at our church - Victory Trinity Lutheran. 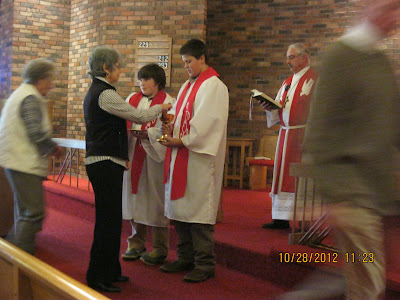 Sam and his confirmation classmate Ian help with communion at our sister church, Bethany Lutheran, where Sam attended classes. Sam was the only person of confirmation age at our small country church, so he joined two others at Bethany and we attended both services today.

So technically I guess he was confirmed twice.
Which I'm sure you know he was incredibly excited about.
I hope it takes. Heh. 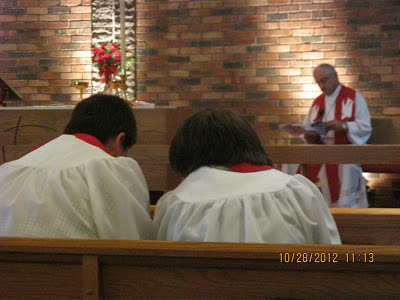 This view just cracked me up. Typical boys ... whispering during church. 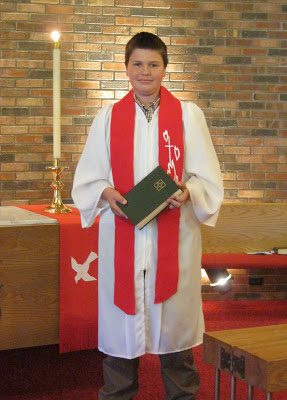 And it's official. Doesn't he look happy?
(He was not down with the robe business at all.)
(Also, there was cake and punch waiting downstairs.)

God's blessings on you, son.

So. Tomorrow is Monday. This week the calendar is decidedly much lighter than it was last week, though we do have Halloween coming up and I'm sure things will fill in as we go along. And if the Tigers can pull off a win in Game 3 of the World Series tonight, it's going to be a long week of late nights watching more baseball. Here's hoping!