Gosh, I didn't realize it had been so long since I last posted! What can I say? It's summer, and we're busy, busy!

We had such a great time. I feel so blessed to have had the chance to go to DC with Rachel and have that mommy/daughter time with an awesome group of Girl Scouts.

As the days go by the excitement over every little thing we did is calming down a bit, but there are some highlights that will always be some of the first things we think of when we talk about our trip.

One of those memories, oddly enough, is the bus ride.

We had pretty much a full day to get to know our traveling partners. Or get to know them a little better, since we were at least familiar with the ladies from our area. At one point as we traveled through the hills of Pennsylvania the bus driver pulled off to the side of the road and stopped - all very suddenly. There was a busy highway on one side of the bus and a guardrail and steep cliff on the other side. For several minutes nobody knew what was going on and the bus driver wasn't sharing. (We did determine he was OK, at least.) With no power on the bus (read: no air conditioning) it got sticky in a hurry. One mom got pretty anxious and asked us to open some windows. We obliged. But one row got a surprise when they released the latch on their window: 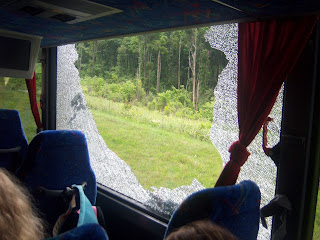 You can't really tell from the photo, but that's actually a double-paned window and it's the outer pane that shattered - so thankfully no one was hurt, and when the bus driver slammed the window to get it to shut, much of the broken glass fell to the ground.

It turned out the bus was overheating and we had to pull over a couple more times before we made it to DC. It happened again on the way home, so somewhere on the turnpike we met up with a different bus and had to unload and reload all of our stuff. The good news: it was a much nicer bus. The not-so-good news: we got home a bit later than anticipated (which wouldn't have been a big deal if it hadn't been 2 a.m.).

There is so much to see and do in Washington, DC, and much of it is walkable. And boy did we walk. We walked, and walked, and walked. We left our hotel after breakfast by 8-8:30 in the morning and we didn't get back until at least 10 each night. The bus would take us to one location where we would visit, then walk to the next place and the next. And so on. We had no trouble sleeping, lemme tell ya'.

Our favorites? The Museum of Natural History - we would love to spend an entire day there. The Star-Spangled Banner exhibit at the Museum of American History - what an amazing piece of our nation's history. The Lincoln Memorial - it's much grander than either of us anticipated. The war memorials and Arlington Cemetery - all beautiful and humbling.

And while I would love to go back as a family and show Steve and Sam some of the things we saw and spend more time exploring, there will never be a trip quite like this again. Because I did it with my girl ... my Girl Scout. 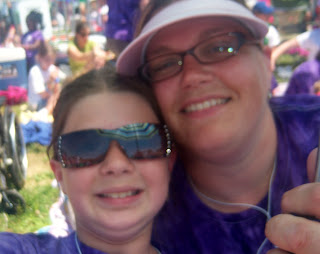 Rockin' the Mall.
Holy smokes, it was HOT that day! 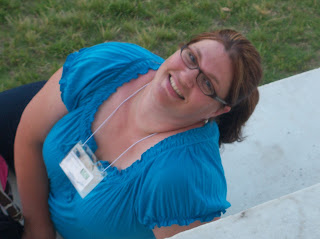 Rachel goofin' with the camera. 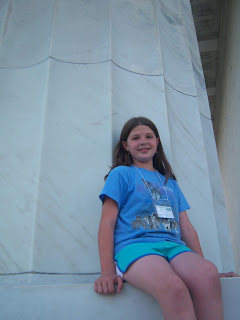 At the Lincoln Memorial. 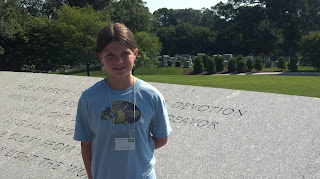 At Arlington Cemetery, near the Eternal Flame.
One of the greatest things about the Girl Scouts of America is how they encourage girls to be whatever they want to be, and make sure they know that girls can change the world. The Rock the Mall event was pretty powerful (if you could survive the heat), the entertainment was great, and we got to be a part of a world-record-breaking dance and singalong. Pretty cool.
We did take a little "detour" during that big day when Rachel got a nosebleed. Poor kid ... she gets them occasionally but never as bad as the one she got that day. So we spent some time at the first aid tent until it stopped. She was just fine after that.

We have some wonderful memories of this trip, and I'm so glad Rachel was persistent with asking me if we could go. I had fun with her, I enjoyed walking around with Rachel's hand in mine and experiencing something new together.

It reminded me, too, of how thankful I am that I am able to do this kind of stuff with my kids. As a homemaker I didn't have to get up early to head to work after only a few hours' sleep, and I am surrounded by family who took care of everything while we were gone, making it possible for me to go, and to focus on my daughter.