I'm here! I feel like I have really neglected my blog lately - which mostly means family and friends who don't see my occasional posts on Facebook might not be as up-to-date on the goings-on of the Pipe Lifers as when I am blogging regularly. For shame.

Well. The business of life continues. Big highlight: Sam shot a beautiful 9-pt. buck during the youth hunt weekend here in Michigan. I will pick it up from the meat processor next week, and will take the head/hide to a taxidermist. We decided to have it mounted for him - Happy Birthday and Merry Christmas for like, the next three years, kid! OK, not really. But close. 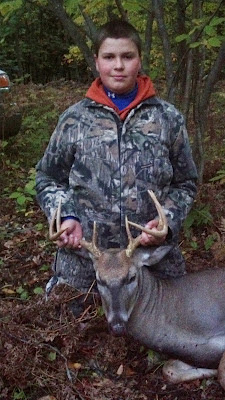 And here's the "Pipe Life" part of the story ... Steve made arrangements to come home and take Sam out hunting over the weekend, but they didn't have any luck. Steve had to head back to Detroit Sunday afternoon, but Sam still had the opportunity to hunt that evening. His Uncle Tom took him out, and that's when Sam shot this deer. I was (and still am) so happy for our boy, but gosh I sure wish Steve had been here to be a part of it, and to see this beautiful deer. Especially since the same thing happened last year, except I was the one with Sam when he took his 4-point. Ah well. Thank God for e-mail and texts and the good ol' telephone.

In other news, Gunnar the puppy is growing like a weed. He is in that puppy "teenager" stage where his legs are long and lanky and he hasn't quite grown into those big ears. His fur is getting shiny - losing that puppy fuzziness - and he is so handsome. Smart, too. Almost too smart for his own good. Some days it's a darn good thing he's that cute. *ahem* And he and Ladybug are getting along splendidly. 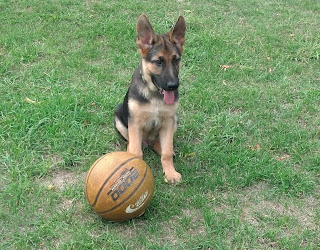 Rachel has started another busy year of Girl Scouts (her Troop will be walking in the Homecoming parade tonight) and is looking forward to signing up for a rec basketball league soon. Sam is halfway through football season (he would want me to mention his team is 3-0) and while he's not getting as much play time as he would like, he is learning a lot about the game, about working together as a team, and his overall health is improving with all that activity.

There's so much more to mention but I said quick update, so I'll stop there. It's Friday and I have errands to run and stuff to do. Enjoy your weekend!