Here we are two weeks into the school year and I'm finally getting a handle on the whole routine again. Last week I had something going on every day in addition to having to pick Sam up from football practice every evening and attending his game on Wednesday, and by Friday night my brain and my nerves were fried. Fortunately we had an easy weekend and I was able to spend most of it at home catching up on a few things I had neglected during the week. Shoot, I didn't even get out of my pajamas on Saturday.

Now it's Sunday night and I am rejoicing in the calm and quiet. When the kids went to bed I turned off the lights and headed to my room, too. I have one dog snoring at the foot of the bed, a cat snuggled up next to her, the puppy asleep in his crate in the corner, and me with clean sheets and PJ's and my laptop. And peace.

It's been a while since I've done a Clean Slate Sunday post, but I would like to get back into the habit. Sunday nights have historically been one of my favorite times of each week - a time when we settle in early, prepare for the week ahead and look forward to new beginnings. My CSS posts began as a way for me to review what I had accomplished over the past few days and make a plan for the coming week. I need at least that much structure in my life. Planning is good. Lack of planning, not so good.

So I'm looking forward to the week ahead. It will be busy, but the calendar isn't quite so crowded as it was last week. I'm happy I will have a little more time to be at home taking care of business, doing some cleaning, and lots of puppy training. We're working on the basics right now: sit, stay, come, down, that kind of stuff. And continuing housebreaking, of course. It's been interesting doing all this with the puppy while still trying to accomplish some of those basics with a stubborn old hound dog who still has terrible manners. (Not for lack of us trying, either.) But for the most part it's great having two dogs in the house. They have become fast friends and they play and play and play until they wear each other out or we put them in separate corners, which is what usually happens. Only because we get sick of the barking. Because apparently chasing each other around the furniture, playing tug-o-war with toys or terrorizing the cats isn't enough. We must also make noise! Aye yi yi. We're working on teaching them to use their inside voices. But there again, we've been trying to get Ladybug to stop barking when told to for four years now. So far? FAIL. That whole hunting/barking thing is pretty deeply engrained in that one.

Anywho, I've been trying to get a picture of these dogs roughhousing over the past couple of days because they look so stinkin' funny. Gunnar pulls his lips back and shows those vicious puppy teeth, and Ladybug basically pins him to the floor by the neck. He pulls a sneak attack and nibbles at her hind legs, so she whips around and chases him until he squeezes into the space between the back of the couch and the wall (which will be impossible - or at least much tougher - for him in a couple months). I got a dozen pictures with two black-and-tan blurs, a couple videos with lots of barking going on, and this: 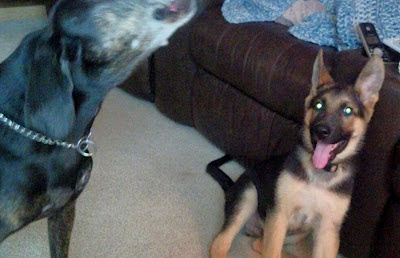 The panting puppy with crazy alien eyes, poised to defend himself against the howling hound.

It's a pretty accurate picture of our days lately. It's like the canine UFC around here. Last pup standing gets the peanut butter-filled Kong. Or something like that. Fun times.