Summer approaches. We will be cool and eat salad.

Cool, because we will have air conditioning installed later this month.

Salads, because I intend to plant lots of salad-making goodies in my garden.

And what is cooler than eating a salad made completely from ingredients grown by and harvested yourself?

I know. My kids don't think I'm funny, either.

Alas, they are stuck with me. And I am kind enough to include lots of the veggies they love in the garden plan, too.

Geez, has it already been a week since I checked in here? We've been busy.

Catching up: I finished the flower bed I was working on last week, and started building the raised beds for planting veggies. I'd love to show y'all some pictures, but someone (hint: not me) seems to have misplaced the SD card from my camera. If it doesn't turn up soon I'll snap some pics with my phone. Anywho, I had to quit working when it started raining Wednesday afternoon. I babysat Thursday, then the kids had Friday off school so we left to spend the weekend with Steve. That was really nice. I can't even tell you how awesome it is to arrive after just a few hours of driving versus an entire day of driving. We helped Steve (or rather "accompanied" him) to get moved to a different campground which is a little closer to the job, closer to home, and appears to be a place we're going to enjoy visiting over the summer. We got home Sunday evening ... yesterday was rainy and dreary and very blah and I'd really rather forget it ... and while I started out with a much more optimistic outlook this morning, the forecast of "mostly sunny and 67 degrees" isn't really panning out. As I write it's 51 and cloudy. Hmph.

However! It's a great day to plan out what I'll be planting in those raised beds once I have 'em finished. I did that this morning with the help of a garden planner on the Mother Earth News web site, thanks to this blog post by Karen over at The Art of Doing Stuff. (Incidentally, in the same post Karen also perfectly and quite hysterically describes my [almost former*] contempt for getting out of bed in the morning.)

Now I'm giddy over my garden plans. For realz. 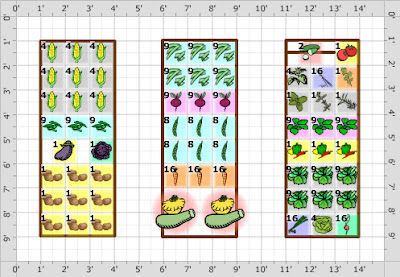 I don't have these labeled, but I have a list of what's there. See that bed on the right? That's the salad bed: lettuces, radishes, green onions, peppers, grape tomatoes, cucumbers (on a trellis, hopefully), and a variety of herbs. Middle bed: summer squash, carrots, peas (peas and carrots!), beets and green beans. Left side: potatoes, eggplant, cabbage, edamame, and sweet corn. I will plant more tomatoes and zucchini in one of the smaller beds I built last year.

A few of these things are new for me. I've never grown potatoes, for instance. And eggplant is not something I eat regularly, but certainly might if I have it growing in the garden. Experimenting is half the fun of gardening! And it really does get the kids interested in trying new things.

Now I just need to print off my list and mark what I'm going to buy - seeds for some, small plants for the rest. Oh, and finish building those raised beds. Come on, summer!

*Would you believe I've been a little brighter-eyed and bushier-tailed in the mornings lately? I think there's something to this waking up gradually to music. This week's wake-up tune is Trace Adkins' This Ain't No Love Song. Or maybe it's just that I know we're on the downslope of the getting-up-for-school routine. Whatevs. It's workin'. I even made muffins this morning. Ha!
Posted by Jen