Our new puppy sure is creating a lot of smiles around here. 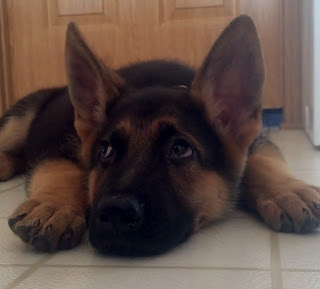 Look at this. How can he not?

Gunnar is a quick study. He's learning his name, he knows to head for the door when we say "let's go potty," and he has even figured out how to weasel his way into Ladybug's heart. Or is it under that poor old dog's skin? A little bit of both, I think.

He has spent the last two nights sleeping in the dog crate with very little protest. We've gotten up 2-3 times every night (and by "we" I mean me and Gunnar) to go outside which is vaguely reminiscent of middle-of-the-night wakeups when we had babies. No wonder I'm so tired.

While we're getting used to having another four-legged friend in the house we're also getting used to a new routine. Sam is now into daily practices for football and it seems like we have something else going on in addition to that every day. Last night Sam and I went to his back-to-school night. Sam had a doctor's appointment first thing this morning and tonight Rachel and I are going to her BTS night while Sam is at practice. It's busy, but it's good. Well. It's good at the moment. It wasn't so good last night when everyone was tired and the kids were bickering and I had my fill of it and went a little ballistic on them. Everyone's a little calmer and kinder today, though. Amazing how that works.

The weather's been pretty warm lately, but the mornings are quite cool. I'm starting to pull plants from the garden and toss flowers that have run their course. Time to simplify outdoors and start to think about doing some organizing and decluttering in the house. I'm looking forward to having some time during the day to focus on that kind of stuff without having kids going behind me and undoing it all.

Six days to go before they start school. Six. Days.