Yesterday it was so warm outside I had windows open in the house.

On December 4. In Michigan.

This morning? Not so much.

We keep getting teased with a little snow here and there, but it melts within a day or two. Up until now I've enjoyed what we got but I was only marginally ready for a big snowfall. Rachel helped me do the last of the tidying-up outside last night though, so now I'm ready for the fluffy white stuff to start piling up and to stick around.

Except I'm not. Because Sam is still on crutches and I worry that he will slip and fall. He has just shy of two weeks before he goes back to the doctor to have his cast taken off. And then I'll be ready. Maybe. Because as soon as the snow starts to pile up and Sam has the OK from the doctor, he's going to start bugging me to hit the slopes. Hhhhh.

I really am ready for some snow. I actually saw some dandelions in the yard yesterday while I was out playing with the dogs. For serious! All this grey and blah out there and then I see these BRIGHT YELLOW flowers poking their heads up. Tough little suckers. I hope they enjoy the snow, too. Ha!

But seriously. Christmas is 20 days away and I would really love a white Christmas. Every day I play my Pandora "White Christmas" station while I putter around the house, and I leave the lights glowing on our teensy little tree.

That tree, by the way, looked like a hot mess this morning. We have had some close calls with the dogs bumping into the table - or the domino effect of chair, then table, and the tree goes a wobblin' - but so far she's still standing. Gunnar can get his nose pretty high, though, so he can slide stuff right off tables, countertops ... basically any surface where you've put something to keep it away from him. 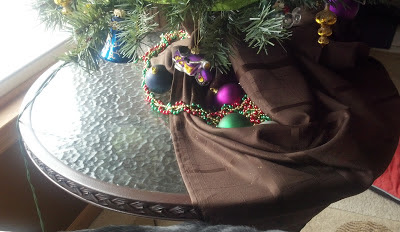 Our makeshift tablecloth-turned-tree-skirt.
Gunnar grabbed one little corner with his mouth, apparently thinking the tree wanted to play a game of tug with him.
I caught it before the whole thing came tumbling down. 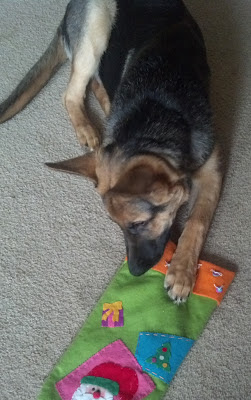 Stockings will not be hung until Mr. Gunnar is safely crated in the bedroom on Christmas Eve. 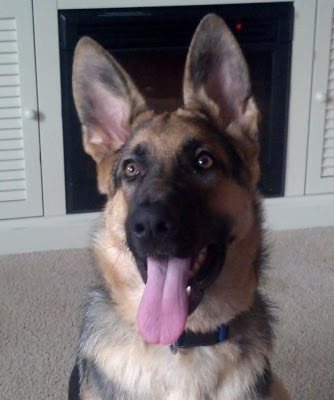 Aww. Despite his daily shenanigans, there is the occasional Christmas card-worthy photo. How could anyone not love this face?

He's ready for snow, too.