Catching up. And ... the Globetrotters!

Dang. It's been two weeks since I last posted. (I always feel like I'm going to confession when I say that. And I'm not even Catholic.) Anywho, life has been moving along at a swift pace and the big story of the day - whether it be health, job, weather, or child-related - just depends on the day.

Today I am thankful it's Friday. Kinda' wishing it was payday Friday, but nonetheless thankful that the weekend is more or less upon us. Because, frankly? I am tired of little people being angry at me just for doing my job and sending them off to school every day. Well. Every day that they have school, anyway, and they're not too sick to go. Between illness and crazy weather it's a crapshoot lately.

Aside from the occasional crankiness from the offspring, and some dreary-weather-induced sleepiness, things are good these days. I feel like I'm in a groove ... not to be confused with a rut, which I am also quite familiar with. No, this is definitely a groove - a good one - and I am thankful for God's eternal grace. Because I can get a little cranky sometimes, too. *ahem*

Kids. At parent/teacher conferences I heard glowing reports from Rachel's teachers. She is a straight-A student, is "just the right amount" of competitive, is a joy to have in the classroom, is helpful to others and meticulous in her work. Sam? Has a lot of potential. His grades do not reflect his natural ability to soak up information like a sponge. He doesn't need notes to ace open-note tests (and it's a good thing because he never takes any notes). Sam is the kind of kid who adults who have had to work so hard for everything get incredibly frustrated with, and some tell him so. But telling a 14-yr-old boy that if he doesn't apply himself today he'll regret it in 10 years is not a great source of motivation. Alas, we continue to search for the ultimate motivator. It's a moving target.

Steve is still in Colorado, and will be there a bit longer than originally planned. He knows where he is headed next - Kentucky - but that job keeps getting pushed back to a later start date. I am really trying to look at this in a positive light, even though it means I don't really know when I'll see him again. It's definitely a good thing that he has been working all winter. And the longer he stays in CO the better chance the rest of us have at making a trip out there and seeing a place we've never seen before. He's renting a cozy little apartment there, which I think makes it a little easier to be away from home. And the weather's not half bad where he is. But I sure do miss him.

As for me, I've been keeping busy around the house, checking things off my to-do list and generally holding things together. Much to the dismay of my children I have been keeping pretty good tabs on the housekeeping (and those who know me know this is quite an accomplishment). Keeping things picked up makes it much easier to vacuum and dust on a regular basis, which keeps my wicked allergies at bay. And speaking of those allergies, I am currently doing some food "challenges" to test my body's reaction to foods I am sensitive to. I pick one (this week it's white potatoes) and eliminate it from my diet for four days, then eat a bunch of it on the fifth day. I have to take note of everything I eat, how I feel all day long, yada yada. Fun times.

I've also been working with the dogs several times each day. Teaching an old dog new habits (forget the tricks) is proving much harder than teaching the ginormous puppy. I try to reserve judgment about Ladybug's intellect and hope my persistence pays off. I just want to be able to greet guests without having to apologize for my dogs' obnoxiousness. Is that too much to ask?

Other than that, it's been more of the same ... budget and pay bills, taxi kids here and there, laundry, cooking and cleaning, wash, rinse, repeat.

Oh! I got a seed catalog in the mail the other day. *happy sigh* My garden beds might be covered in snow now, but it won't be long ...

And finally, the kids and I and their Aunt Sue went to see the Harlem Globetrotters last weekend. My brother-in-law and Sue had received the tickets as a gift at his company's Christmas party and he wasn't interested in going, so Sue and I took the kids. It was a total blast. We were able to go in early and hang out on the court with some of the team members, take pictures, and then stay for the game. It was a great experience and we made some lasting memories.

Here are a few pictures: 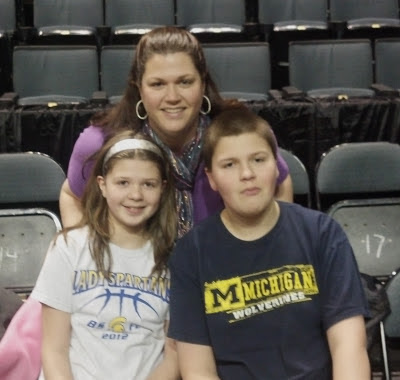 Teenage boy would not smile to save his life. 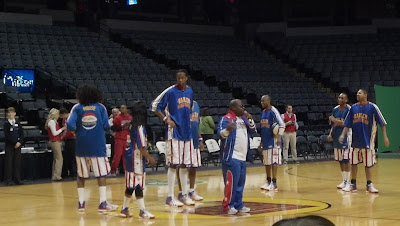 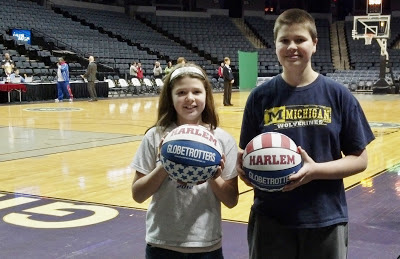 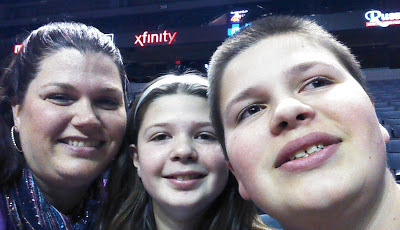 "Mom. Would you stop taking pictures?" Handles helped us spin the ball on our fingers. This guy was hilarious throughout the game. 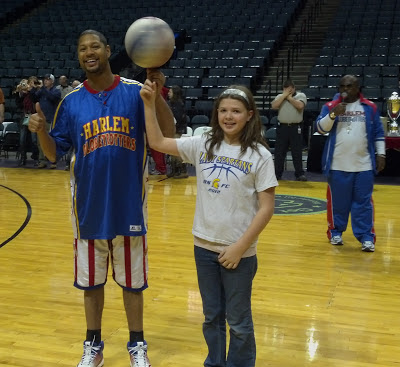 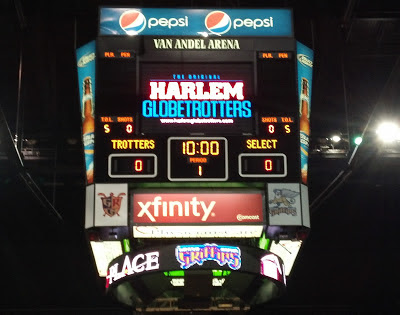 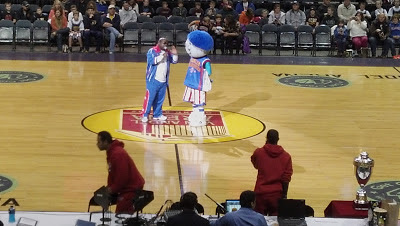 MC with Globie the mascot. 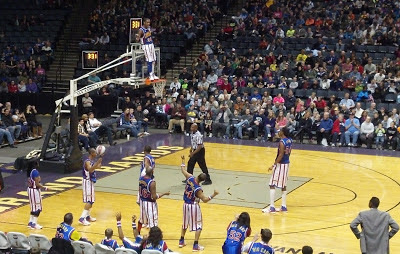 Check out Bull up there on the basket. He was actually dancing up there. 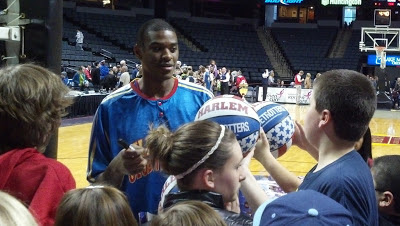 And ... autographs after the game.